We have wood lathes in the wood workshop that can be used as an entry to woodturning - once a community of turning enthusiasts develops and the machines become too weak for more ambitious projects, we can think about replacing them with a professional model.

The Tyme Avon is an old, but solidly built lathe that has replaced our flimsy Güde 1000.

The lathe can run at various speeds depending on which pulleys are connected by the belt: 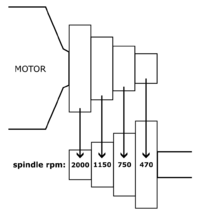 Do not put excessive tension on the belt - you'll be very happy about the belt slipping in case you've made a mistake and the tool digs into the workpiece!

SAFETY NOTE: Make sure you lock the box with the on/off switch in place before use! DO NOT start the lathe when it can swivel, you may not be able to safely turn it off then and the belt/pulleys are exposed!

this lathe can be used with a drill chuck!

The D 460F has an electronic speed selection which is regulated by a potentiometer (without scale!) above the on/off switch.