Luzian wanted to have a laptop stand since he sits in front of his 13" laptop a few hours a day and looking down on its screen wasn't good for his posture.

Luzian actually wanted to mill it out of plywood on the CNC Router but then he just used the Laser cutter. The downside of laser cutting was having to clean up the burnt edges which - as you might know if you have used a laser cutter yourself - isn't a lot of fun.
Also, the angle in which the laptop is sitting is too steep and the catches are too small. Therefore the laptop falls off easily when you touch it.
The build is not ideal, but making it provided some important lessons which will be incorporated into future verions.

In the 2nd version of the laptop stand Luzian tried to address all the issues of version 1. The idea was to make the design cleaner and have some space underneath the laptop to store stuff. Also the open sides allow cables to be routed thru. Though after 2 failed prints the build was discontinued.

As they say: "3rd one is the charm". It's basically a slightly modified version of V2. The differnce being, instead of having to print 2 big parts, it's now split into 6 smaller parts. the rest pretty much stays the same. 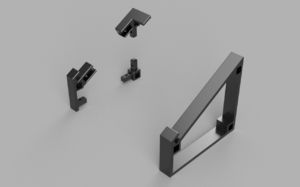