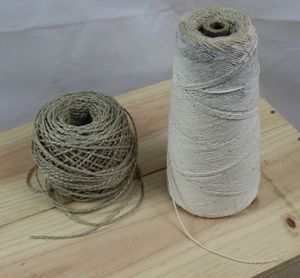 Strings and ropes are made of twisted twines, i.e. the yarn - or wire - is intertwined on two levels. "String" usually refers to somewhat thinner varieties and you eventually say "rope" when it feels thick enough to deserve that name (according to Wikipedia [1], strings consist of less than six twines while ropes are made of more).

You can make strings and ropes yourself using simple jigs or even your bare hands if you want!

We do not have any ropes in stock yet, but the versatile and very strong "Paracord" used by many hobbyists counts as a rope.