tl;dr fixed my first movement and wanted to share

Just wanted to share this with you since it is the first movement I fixed. The watch belongs to my mother and was a gift from my father. It worked well but wasn't the most accurate anymore. It then started to speed-run when shaken. The hypothesis was that the escape wheel or pallet fork was broken. After inspection I found out that the bearing pin on the escape wheel had broken off (the thing that rides in the ruby). I found a new one on aliexpress for less than a dollar but ended up paying $5 for shipping. After waiting a few weeks I had to take out the balance wheel to swap the escape wheel. But after reassembly it started ticking again. I have the luxury of good tweezers and a stereo microscope so I could see what I was doing. 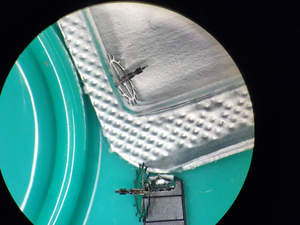