Seminar on "Parametric modeling with OpenSCAD" by Mitja

We will give an introduction to parametric modeling and design a few things with OpenSCAD.

Have a look at OpenSCAD's user manual for more information and specific functions!

After also tinkering with some spheres and cylinders (enter $fn= followed by a number to define your desired face count, high numbers increase rendering time!), let's move on to parametric designs.

We'll make an "L" with adjustable side lengths and a parametric hole.

The "L" is rather simple and consists of two "cubes" that are actually rectangles due to the entered values. By adding the global variable "edge_length", we can later change the dimensions of the entire letter while keeping its proportions:

Then, we add a hole with a corresponding "hole_diameter" variable and turned the L into a module which can then be called similar to cube or sphere from the first examples: 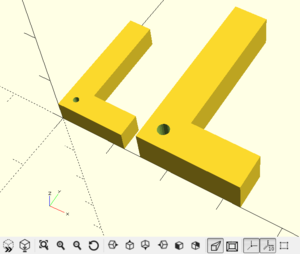 rendering resulting from the code above

The last two lines in this example create two "L" shapes with different sizes, one of which starts at the origin while the other is moved 15 mm in X direction.

Uploading the design to Thingiverse is easy, just click "This is a customizer" in the process and the app will automaticall parse your variable names and the associated comments. Make sure to comment precisely and understandably so others enjoy your customizable creation!